There is a historical bridge in the middle of Tokyo.
Nihonbashi bridge. In the middle of bank area Nihonbashi town, the city center of Japanese economy.
And this bridge is included in one of the Soshi’s Tokyo bike tour route, “Tokyo Central Bike Tour”
Nihonbashi bridge, originally built in 1603 by Shogun(general) Tokugawa Ieyasu and in 1604, this bridge was designated as a starting point of 5 highways in Japan.
Even now, all National Highway’s distances are measured from this bridge. In other words, this bridge is known as kilometer zero.
This bridge have been destroyed by fire 18 times.
And current bridge was rebuilt in 1911.
Above the bridge, there is another highway which was built in 1962.
Some people might think it’s ugly to construct new highway on the historical bridge but there is also another history on this new highway.
In 1964, we have Tokyo Olympics and that was symbol of revival from the World War. Japanese government needed to improve infrastructure for appealing but they did not have money nor time. So they decided to construct highway on the river and they did not need to buy land for construction.
As a result, green highway was built above Nihonbashi bridge.
But there was a news recently. Tokyo governor mentioned they will start construction for new highway under the river within 20years. In the near future, you may see the sky from Nihonbashi bridge.
Since Edo period(1603-), many visitors visited this town from all over the country and departs from here to their hometown. As a finishing or departing point of their travel, Nihonbashi have been thriving one of the biggest shopping district in Japan.
Because of 400years rich history, there are many over 100year shops and restaurants here.
Here in Nihonbashi, you can enjoy both history and shopping. 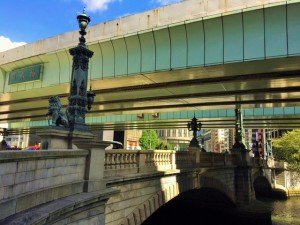