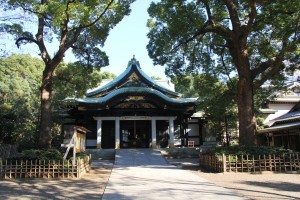 According to the ridge tag, Kishimojin Honden was constructed in 1664, Haiden and Heiden (offering hall), which have complex roof styles, were built in 1700. According to Shinpen-Musashifudokiko(chorography of Musashikoku), princess man (3rd daughter of Toshitune, a feudal lord of Kanazawa clan), the official wife of Mitsuakira Asano, a feudal lord of Horoshima clan, contributed to the construction of this temple. Honden is Sangensya-nagare-zukuri(3-bays wide and has a symmetric flowing style gable roof) and 2-bays deep. It contains a 3-bays wide room including a step canopy. Heiden which connects Honden and Haiden, is 3-bay wide and 1- bay deep. A three steps stair is connected to its center. Haiden is 5-bay wide, 4bays deep, and has a hip-and-gable roof and plover bargeboards. A step canopy with undulating bargeboard is at front and veranda surrounds the front and the sides. Kishimojin was founded because a Kishimojin statue was found in 1561. According to Shinpen-Musashifudokiko and other records, a sub-temple, Touyobo(now Daigyou-in), was the main worship place before. At the end of Edo period, Houmyou-ji was so popular that even the Shogun visited. 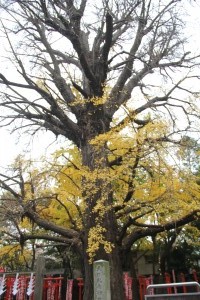 This is an outstanding giant ginkgo tree at Kishimojin-do in Zoshigaya. The trunk circumference is 6.63m, the height is 32.5m and the branches reach out 10m in all directions. It is the second biggest ginkgo tree after the one in Zenfukuji (designated a national monument by the government in 1930, however it was unlisted in January 1946 and designated again by Tokyo metropolitan, It was called Kosazuke Konsouju (the ginkgo that gives children) and people believed it had miracle power. But now it is called Kosodate Icyo (the ginkgo that raises children).
This is probably because the power of the ginkgo tree was similar with Kishimojin’s. it offers a quite view, in contrast to the nearby busy downtown of Ikebukuro.

We visit here in our Tokyo North Cycling Tour.