History
The hidden image was orijinally netted in the river

The name Asakusa appeared for the first time in the history of Japan in 628,when a small image of the Kannon was netted by two fisherman in Asakusa.The people in the village built a small temple for the image by the Sumida River not knowing anything about its orijin.The image has been kept hidden in a sealed wooden box since 645,when a priest who had been invited from Nara to see the image suggested doing so.The box was opened once in 1868 by officers sent by the Meiji government to execute orders regarding the separation of Shinto and Buddhism.The temple received constant support from powerful samurai clans and it became a family temple of the Tokugawa shogun in the early Edo period.Most of the temple buildings were lost during the Second World War.The main hall was reconstructed in1958, the Kaminari-mon or Thunder Gate in 1960,and the five story pagoda in 1973.

Architecture
Houses to serve tea changed into shops
Nakamise Arcade
This is the arcade built along the main approach to Sensoji temple ,extending from the main gate,Kaminari-mon, to the main hall.Now there are 89 stores in the 250-meter arcade.Today,most of the shops sell souvenirs ,but orijinally they were started by people in the neighborhood of the temple who voluntarily cleaned its prencincts.Later,they were granted permission by the temple to serve tea for the worshippers and to open shops.

Kaminari-mon(Thunder Gate)
The gate is officially called the Gate of the Thunder God and the Wind God .The two gods are believe to be able to save the temple from natural disasters and fire,and also responsible for abundant harvests. A gate orijinally located near Komagata Bridge was moved to the Kaminari-mon site but it was burned down in 1865.The gate was not rebuilt for 95 years,but it was finally reconstructed in 1960 financed by a donation from Konosuke Matsushita.
As for the Kaminarimon lantern, it is 3.3meters wide and 3.9meters tall.The weight? A staggering 700kilos !The lantern is replaced once every ten years. 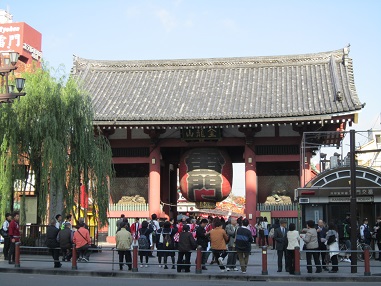 Main Hall
The main hall, dedicated by Tokugawa Iemitsu , was lost in 1945 during the Second World War .The present ferroconcrete main hall was completed in 1958.The paintings of celestical ladies and a dragon on the ceiling were done by Insho Domoto and Ryushi Kawabata, respectively.The framed Chinese characters hung on the wall above the offertory box read se mu I,meaning the Kannon will take care of your fears.

Questions from Foreigners
The temple bult by the common people
Q Is it true that this is the oldest temple in Tokyo ?
Yes and it was built by the common people.The temple dates back to 628,when two fisherman brothers found a small ,shiny gold image of the Kannon Bodhisattva in their fishing net. The first temple was built by a village leader near the Sumida River, where the statue was netted. Since then, the buildings have been destroyed and rebuilt many times. The present main hall of the temple was completed in 1958.

Q Why are statue of the God of Wind and the God of Thunder in the main gate ?
It is said that both are the gurdians of Buddhist temples because their fierce expressions will ward off evil.Some also believe that they will bring people better harvests, because the wind helps spread seeds and the rain brought by thunder helps them grow.

Q Why does one of the Deva kings have his mouth open while the other has his mouth closed ?
The Deva king with his mouth open is saying “a,”the first sound of the Sanscrit alphabet and the other with his mouth closed is saying “n,”the alphabet’s last sound.The implications is that the kings will not miss anything that happens from the beginning to the end of the world.It is said that the Japanese alphabet, which also starts with the sound “a” and ends in “n,” was influenced by Sanscrit phonetics.

Q What does the five-story pagoda in sensoji temple contain ?
Five story pagodas are built to enshrine fragments of the sacred relics of the founder of Buddhism,Siddhartha Gautama.In Southeast Asia,such fragments are kept in funeral mounds topped with something designed like layers of parasols.In China the layers were changed to a pagoda.While most pagodas in Japan do not contain genuine relics,the pagoda. In Senso-ji has genuine relics received from Isrumunia Temple in Sri Lanka

Q Why is a swastika on the lanterns and temple roof ?
Peple tend to have a negative impression of the swastika,perhaps because the symbol in reverse was used by the Nazis.However ,the swastika has been used as an auspicious symbol in India as well as in Scandinavian countries since ancient times.In Japan, the symbol is used to indicate the location of Buddhist temples on maps. This is done because in China and Japan the swastika is considered auspicious,being the mark believed to have been on the historical Buddha’s chest.