Defining kami is not easy. It is best to think of a kami as something that produces the emotions of awe or fear. A kami can be positive, but it always possesses a miraculous, mysterious power. A kami is either the power itself or something that possesses such power. Rather than translating kami as “god/gods,” it is safer to translate it as “deity/deities.”
Japanese tradition refers to yao-yorozu-no-kami, which means “myriads of deities.” But there are two main categories of kami. One kind is the heavenly or earthly kami mentioned in Japanese mythology. The other includes those connected with natural phenomena, those connected with historical people and those who are connected with prosperity, commerce and occupations. Farmers, fishermen, and hunters each have their own deities.
Natural phenomena that are considered kami are Mt. Fuji, other impressive mountains, waterfalls, peculiar rocks, unique or ancient trees, thunder and lightning. In the animal world, deer, snakes and foxes are considered kami. Among humans, over a period of time, the 9th-century court scholar Sugawara no Michizane became deified as Temman Tenjin, patron saint of scholarship. The first Tokugawa shogun, Tokugawa Ieyasu, was deified as Daigongen at the Toshogu shrine at Nikko.

While Shinto is usually treated as a religion, it is different from most so-called world religions. It does not have a founder. It does not have real scriptures. And it does not have a system of doctrines.
Basically it evolved out of the ancient worship of unique natural phenomena, ancestors and various kinds of kami. This worship did not need to have a name until it was confronted by Buddhism, which was imported from China. Eventually it came to be called Shinto, “the way of the deities,” to distinguish it from the newly introduced Buddhism.
Shinto existed side by side withBuddhism. Sometimes its kami were said to be manifestations of buddhas. Sometimes the two religions became involved in political conflicts. But as a general rule, Shinto continued to be an integral part of everyday life, especially in farming communities. It remains part of Japanese life, partly because it focuses on positive beliefs, purity and hopeful wishes. This makes it assessable to anyone, at any level of belief. 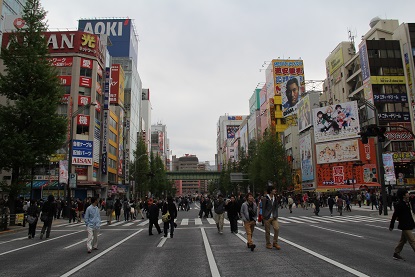 If you want to buy some electronics or information technology equipment as souvenir, Akihabara is a must. There are about 500 electronics stores in Akihabara. Akihabara is only two minutes away from Tokyo station by train.
You can find electrical products which match your voltages and frequencies.
In 1945, after World War 2, some electronics shops were opened here. They sold radio parts used by the military. This was the origin of Akihabara as an “electronics town”

Mirrors, swords, and jewels have been considered to be the “three sacred treasures” since ancient times. They are regarded as symbol of wealth. Japan enjoyed a period of prosperity from 1955 to 1965, and the television set, the refrigerator, and washing machine were nicknamed the “three sacred treasures.” The number of electronics shops rapidly increased in Akihabara.

Young people began to come to Akihabara in the 1980’s when Nintendo began selling video game consoles and they became popular. Akihabara has also been gaining popularity as a computer town since Windows 95 appeared on the market. If you want to understand modern Japanese culture, you should walk through and look at the goods sold in Akihabara. It’s also fun to do people watching there. Akihabara is the slow window of Japanese subculture.

Akihabara has also become a magnet for “otaku,” a word which roughly means “geeks,” especially for comic enthusiasts. Akihabara is crowded with a variety of attractions on weekends. “Cosplay” is very popular now. “Cosplay” is Japanese English. This word is a combination of “Costume” and “Role-play.” Some young people enjoy dressing up and playing the parts of famous characters, not only from comics but also movies and novels. They probably want to show the hidden sides of their characters to others.

The same thing can be said about “maid cafes.” There are also several “maid cafes” where waitresses dress up like real domestic maids. They treat their customers very politely and behave like real maids. The customers fell like the lords of huge mansions. This is another expression of the new subculture.